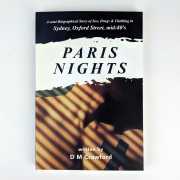 22cm x 15cm. [v], 191 pages. Pictorial wrappers. A semi-biographical story of sex, drugs, and clubbing in Sydney, Oxford Street, mid-80's. "Mark was a closeted suburban boy from Wollongong, hiding his sexuality within his surroundings. The enticing allure of Oxford Street nightlife beckoned and in particular a legendary nightclub called Patchs. A semi-biographical account of a young man's journey and self-discovery which leads to a chance encounter as he hooks up with an older guy called Matt Paris, who's been around the traps and harboured a secret past. They form a complicated friendship and bond as they embark on a shared weekend life together. Both men were from vastly different backgrounds, experiencing the highs and lows of gay life on Oxford Street in the mid to late '80s of sex, drugs and clubbing. Oxford Street was called Sydney's 'Gay Golden Mile'. A beehive of social activities gathered on this strip that glittered with life and a party atmosphere catering for everyone's tastes and fantasies. The DJ's in these establishments were the Gods of the dance floor, playing an accompanying soundtrack to your life. This was Mark's story and experience!" (publisher's blurb) Shipped Weight: .29 kilos. ISBN/EAN: 9781925742350.
▲