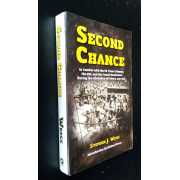 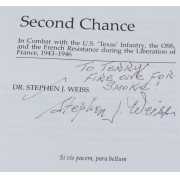 SIGNED by the author and inscribed "To Terry, fire one for smoke!" Clean unmarked pages, slight wear to jacket edges. An excellent and fascinating read from a man who started the war as an ordinary GI Joe, and then, through fate, found himself behind the lines in France, mixing in the exalted company of the Resistance and the OSS. He then went on to fight with his infantry unit on the German border in the terrible winter of 1944/5, where, under constant fire, he became bitterly disillusioned with the US Army, and its lack of support for the ordinary soldier. For his exploits, he was heavily decorated by the French, earning the Croix de Guerre and the Legion d'honneur, among numerous other awards. He later went on to become a distinguished academic, and today is a lecturer on War Studies, uniquely amongst his academic peers, able to draw on his first-hand experience in WW2. Why is this book not more readily available in the shops and libraries ? It is a must for anyone who is interested in combat studies, and the lasting psychological effect on the ordinary man. 408 pages. Quantity Available: 1. Category: Military & Warfare; Inscribed by Author. ISBN/EAN: 9781780394664. Inventory No: dscf10630.
▲