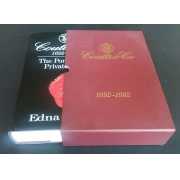 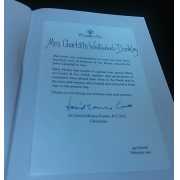 SIGNED by David Money-Coutts to the previous owner, on Coutts notepaper affixed to the front endpaper. Clean unmarked pages, lightly creased jacket, slight discolouring to slipcase. A history of the private bank that has served royalty and flourished through three centuries of great change, presenting its human face rather than merely a record of a financial institution. Part one describes the Bank's origins with the Scottish goldsmith John Campbell and its other strong Scottish roots. Part two concentrates on Thomas Coutts, 1750-1837, his reorganization of Campbell's bank in the Strand (where it still remains), his two secret marriages and his pursuit of powerful and royal customers. Part three is the period of Angela Burdett-Coutts, whose span is virtually identical with the reign of Queen Victoria. Part four brings the story right up to 1992, describing the modernization of the Bank in its new premises. It ends with a look into the future and a look back in the modern banking hall. Illustrated. 448 pages. Quantity Available: 1. Category: Economics; Inscribed by person(s) connected with book. ISBN/EAN: 9780340558263. Inventory No: dscf10082.
▲