Shipped From United States of America By: Dennis Holzman Antiques 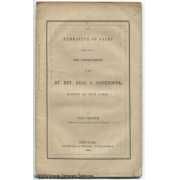 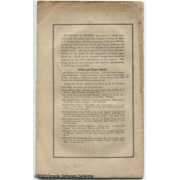 Size: Octavo (standard book size). Text body is clean, and free from previous owner annotation, underlining and highlighting. Binding is tight, covers and spine fully intact. Original printed wraps, string bound, 22 pages, advertisement for other books by the same publisher on back wrap. Corners creased and chipped, small piece missing at top of spine back, wraps soiled, foxed to varying degrees throughout. Benjamin Treadwell Onderdonk (1791-1861) was the Bishop of the Episcopal Diocese of New York from 18301861. While he presided over the Diocese during a period of expansion and was instrumental in the creation of numerous parishes, he is best remembered as one of the most controversial figures in the history of the Diocese of New York, and indeed the Episcopal Church in the United States. A number of women alleged that Onderdonk had made improper advances towards them and had engaged in improper touching. This led to a trial (Presentment) which led to a guilty finding and Onderdonk was suspended. Many believed these were trumped up charges to punish Onderdonk for finding Arthur Carey suitable for ordination (Carey was accused of having Roman Catholic leanings). Quantity Available: 1. Shipped Weight: 1 lb 0 oz. Category: Religion & Theology; Books; Pictures of this item not already displayed here available upon request. Inventory No: 009658.
▲