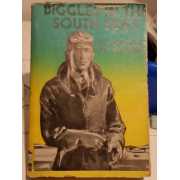 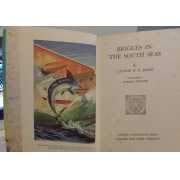 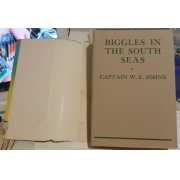 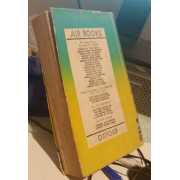 Biggles bumps into Sandy Macaster, an old friend and colleague from 266 Squadron in France, outside the Royal Aero Club in London. Sandy has a tale to tell of finding thousands of oysters covering a shallow part of the sea floor around one of the islands that are around Tahiti. Here he hopes and expects to find a fortune in pearls. Sandy had been stranded on the unknown island where he has been rescued by two native Marquesans called Shell Breaker and Full Moon. Biggles agrees to finance an expedition on the basis of a four way split and he and Sandy together with Algy and Ginger set off. However, an evil Corsican named Louis Castanelli also knows of the pearl bed as he was with Sandy at the time of the discovery and had tried to kill him. Meeting Castanelli at Papeete Harbour in Tahiti, Biggles and Castanelli cross swords. Biggles learns that Castanelli has kidnapped Shell Breaker in order to discover the location of Sandy's island. Later, Biggles leads a daring rescue attempt to free Shell Breaker and he takes both Shell Breaker (a young man) and Full Moon (a young woman) with them. Arriving at Sandy's Island things go well and a fortune in pearls are recovered from the oysters. Sandy is attacked by a giant octopus that goes on to attack their aircraft. The pearls are carefully buried in a safe place on the island. Ginger, Shell Breaker and Full Moon discover an underground cave but are trapped in it by the arrival of a Mako shark. The weather turns as a hurricane looms and Biggles, Algy and Sandy are forced to leave the island in order to fly their aircraft to safety, leaving behind the others and in their haste, also the pearls. Ginger, Shell Breaker and Full Moon escape the cave and have to survive the full force of the hurricane when it hits the island. Their troubles are added to when Castanelli and his crew arrive at the island. Ginger is captured trying to steal a small boat moored by Castanelli's Schooner. Castanelli goes ashore and searches the debris of our heroes' camp where he finds, to Ginger's dismay, that the hurricane has uncovered the pearls! Castanelli decides to dispose of Ginger by tying him to a metal bar and throwing him overboard to drown. Meanwhile, Biggles has allied himself to the natives on the island of Rutuona who have cause to hate Castanelli, having been alerted by Shell Breaker and he tows their war canoe to Sandy's Island as damage to the aircraft prevents it from flying. Ginger is saved from drowning by Full Moon who has stayed on Sandy's Island and is able to cut him free. Ginger and Full Moon take refuge in their hidden cave but they are spotted on the way there and Castanelli tries to blow them out with dynamite. Biggles and the native war canoe arrive and it is soon all over as the natives make short work of Castanelli's crew. Castanelli tries to swim for it but meets the Mako shark. Castanelli's Schooner is burnt out and the pearls are lost ........... or are they? - Biggles website It is a soft card cover, with dust jacket. I assume due to wartime rationing. All pictures shown are of the actual product offered for sale Size: 180mm - 250mm. 255 pages. Moderately foxed throughout. Dust jacket has wear, some chips & tears, a few holes, some marking as well as bumping and shelf-wear.. Dust Jacket price-clipped. Previous owner's inscription in ink, neat. Edges foxed and browned. Covers have some shelf-wear, as well as some bumping to corners and extremities. Quantity Available: 1. Shipped Weight: Under 1 kilogram. Category: Fiction; Pictures of this item not already displayed here available upon request. Inventory No: 20300.
▲