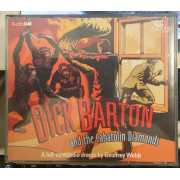 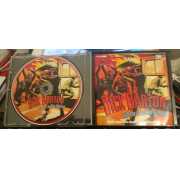 Douglas Kelly stars as 'Dick Barton - Special Agent' in another thrilling adventure for radio's greatest hero. Heralded by an instantly memorable signature tune, the adventures of special agent Dick Barton and his friends Jock and Snowey, were essential listening for an entire generation. Originally starring Noel Johnson, Duncan Carse and Gordon Davies, in an exciting world of criminal masterminds, espionage and adventure, it ran on the BBC Light Programme between 1946 and 1951. Sadly very few original recordings still survive. However, in 1949 a number of early Barton tales were re-recorded for transmission overseas. Starring Douglas Kelly, these re-stagings found new audiences in Australia, New Zealand and South Africa. These recordings were rediscovered in the National Film and Sound Archive of Australia in 2009 and allow listeners to finally relive the escapades of the great Dick Barton. In this recording from Spring 1949, Dick's plans for a Mediterranean cruise are cancelled, when the Home Office ask him to help them crack a gang of international diamond smugglers. Can Dick thwart the evil Henri De Flambeau, before it's too late? Find out in "Dick Barton - Special Agent!" Guidance: as this contains archive material the sound quality may vary. The language reflects the era of the first broadcast. About the Author The original idea for Dick Barton came from Norman Collins, Head of the Light Programme. In January 1946, he sent a memo to an assistant asking him to investigate the possibility of a daily 'cloak-and-dagger soap opera'. Matters quickly progressed and soon the fictional hero of the serial had a name - Bill Barton (later changed to Dick). Barton's history was very thoroughly researched. It was decided that he had been born on Tuesday 10 December 1912 at 5pm. The BBC went so far as to ascertain from the Town Clerk of High Wycombe and the Air Ministry exactly what the weather conditions were at the time of Barton's birth! At the time the series started, Barton was thirty-five years old. He had enjoyed a 'good' war and, in November 1945, was wondering whether he could face going back to the dutiful daily grind of the pre-war years. Having established their hero, the BBC needed to find an actor to play Barton. Noel Johnson fitted the bill perfectly: not only did he look exactly how the producers imagined Barton to be, but he was a good actor who learnt scripts accurately and quickly. However, the early days of Britain s first daily serial were inauspicious. Within two weeks, the Daily Worker had condemned the programme as being so bad as to be almost beyond criticism . But the listeners proved the critics wrong and soon some fifteen million were tuning in to hear the adventures of Dick Barton and his pals Snowey and Jock. Although the series had been originally conceived as a fast moving cartoon strip aimed mainly at adults, the BBC soon realised that children were abandoning their homework in their thousands in order to tune in, and it was decided that all references to alcohol or girlfriends should be cut out of the script. It was still considered too exciting for some, however, as this headline from the time shows: Dick Barton Too Thrilling for Girls? Headmistress says Yes ! The newly cleaned-up Barton went on to enjoy hundreds of adventures that enthralled listeners for six years. Noel Johnson left the series in 1949, largely due to money disputes, and was replaced by ex-boxer Duncan Carse. In the final year Gordon Davies played the hero. The series was written by Edward J. Mason and Geoffrey Webb. They later went on to write The Archers, which was to displace Dick Barton on the Light Programme, much to many people s dismay Terry Wogan has said he has never been able to enjoy the goings-on in Ambridge because they took Dick Barton away from him!" All pictures shown are of the actual product offered for sale. CDs are in very good condition Size: 120mm - 150mm. Item Type: Audio Book. Covers have some shelf-wear, as well as some bumping to corners and extremities. Quantity Available: 1. Shipped Weight: Under 1 kilogram. ISBN: 1408468107. ISBN/EAN: 9781408468104. Pictures of this item not already displayed here available upon request. Inventory No: 19935.
▲