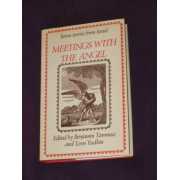 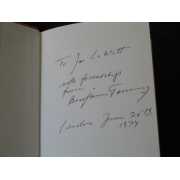 silver titles spine; previously owned by the artist Jan Le Witt & signed by one of the editors on the front endpaper with the following inscription: "To Jan Le Witt with friendship from Benjamin Tammuz London June 25th 1974"; jacket design by Jill Henderson; "The seven magnificent stories in 'Meetings with the Angel' by seven Israeli writers (Yitzhak Ben Ner; Yossl Birstein; Amalia Kahana-Carmon; Yaacov Shabtai; David Shahar; Dan Tsalka & A. B. Yehoshua), were all written in the last ten years. The title under which Benjamin Tammuz has collected them was chosen because each of them reflects in some form the Israeli's confrontation with his identity; yet they are so different in style and subject that they must be thought of as 'stories' first and as 'Israeli stories' second. Perhaps the greatest contrast is between 'Early in the Summer of 1970', the beautiful and tragic story of an old man learning that his son is dead, and 'A Private and Very Awesome Leopard', a supremely comic portrait of a con-man who is more poet than villain, Then there is the sober precision of 'The End of the Da'oun', in which a Jewish archaeologist's relationship with a Bedouin tribe sounds the depths of the gravest problem in the Middle East, to set against the exuberant oriental fantasy of 'The Pope's Moustache', which turns on Mr Gabriel Luria's dishonourable intentions towards an English nun. . . . Sad or happy, ironic or tender, the collection offers extraordinary variety of experience, unified by the fact that: all the stories are among the finest products of one of the most vigorous literatures in the world."; mint copy in a price-intact & protected D/J.; 249 pages plus mini-biographies of the authors. Size: 8vo - over 7¾" - 9¾" tall. Quantity Available: 1. Category: Fiction; Jewish Interest; Anthology; Short Stories; Israel; Literature & Literary. Signed by Editor. ISBN: 0233964851. ISBN/EAN: 9780233964850. Pictures of this item not already displayed here available upon request. Inventory No: SST00001.
▲