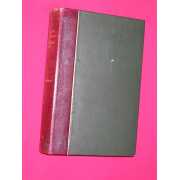 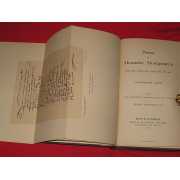 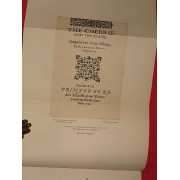 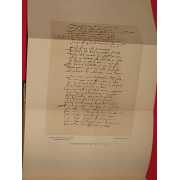 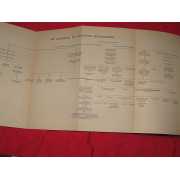 quarter leather with gilt border line to green cloth covers; printed for the Society by W. Blackwood and Sons & illustrated by three fold-out facsimiles of the original manuscripts, a fold-out geneaology of Alexander Montgomerie & a 65-page introduction & contents list to the front & a large section of appendices including biographical matter & notes to the poems to the rear. Alexander Montgomerie (c. 15501598) was a Scottish Jacobean courtier and poet, or makar, born in Ayrshire. He was one of the principal members of the Castalian Band, a circle of poets in the court of James VI in the 1580s which included the king himself. Montgomerie was for a time in favour as one of the king's "favourites". He was a Catholic in a largely Protestant court and his involvement in political controversy led to his expulsion as an outlaw in the mid-1590s. Montgomerie's poetry, much of which examines themes of love, includes autobiographical sonnets and foreshadows the later metaphysical poets in England. He is sometimes, by tradition, given the epithet "Captain". Size: Large Octavo. 65 + 392 pages. Text is in Scots. Binding is tight, covers and spine fully intact. no Dust Jacket as published.. Top edge gilt in good condition. Gilt titles spine. light rubbing to head of spine. Includes glossary. Quantity Available: 1. Shipped Weight: Under 1 kilogram. Category: Poetry; Scottish Poetry; Sixteenth Century Poetry; Scottish Literature; Scotland; Renaissance 16thc to 17thc; Scots Language; Literature & Literary. Pictures of this item not already displayed here available upon request. Inventory No: 3921.
▲