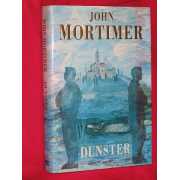 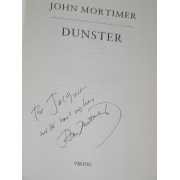 This is the gripping story of two men, Dick Dunster and Philip Progmire, locked in an adversarial friendship from their schooldays, at Oxford and on into a harsh world and the shifting grounds of marriage. It brings us the extraordinary figure of Dick Dunster who drives the story to its climax. Progmire's thespian longings, nurtured since he was a university actor and through his liaison with the Ophelia to his Hamlet, are now submerged in his work as an accountant with Megapolis Television plc. But at least he sees actresses on the other side of the canteen, and he pursues his taste for drama with the Muswell Hill Mummers. Dunster is also at Megapolis, engaged on a TV expose of war criminals, focusing on a blown-up church and the massacre of the whole population of a small town during the Italian campaign. As Dunster researches his subject, the scene darkens and Progmire tries to protect the victim of his old school friend's merciless inquisition. Long after the cessation of hostilities, Dunster and Progmire are at war. John Mortimer gives .us a remarkable cast of character: the relentless and single-minded Dunster; the ambivalent Progmire; Crispin Bellhanger, the charming one-time war hero and chairman of Megapolis Television, and his wife, Angie, star of many, forgotten British wartime movies; the dubious Major Jaunty Blair and his daughter, Bethany, who once played Ophelia at Oxford. Culminating in a trial scene that only John Mortimer could write, Dunster is a contemporary tale of friendship. love, honour and betrayal. It is a novel that compels one to take sides. Should old men be left with their secrets? Will we be for Dunster or for Progmire? Size: Octavo (standard book size). 296 pages. Binding is tight, covers and spine fully intact. in archive acetate film protection. Dust Jacket un-clipped. Gilt titles spine. very slightly cocked. blue cloth. Quantity Available: 1. Shipped Weight: Under 1 kilogram. Category: Fiction; Novels; Fiction. Inscribed by Author. ISBN: 0670840599. ISBN/EAN: 9780670840595. Pictures of this item not already displayed here available upon request. Inventory No: 3502.
▲