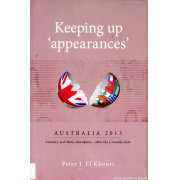 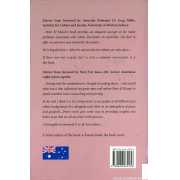 First impression. Size: Octavo (standard book size). 290 pages. Text body is clean, and free from previous owner annotation, underlining and highlighting. Binding is tight, covers and spine fully intact. No foxing in this copy. All edges clean, neat and free of foxing. Library stamps etc only on endpapers, half-title page.. This book is available and ready to be shipped.. The author looks behind the cover of two principal appearances in contemporary Australian society. First the 'Anglo appearance' or ancestry, perceived as the overwhelming dominant population. Second, the 'ethnic appearance' (but not 'Anglo') expected as foremost in the reporting of crime. The study begins with a statistical analysis to determine whether there is today, or has been historically, an overriding Anglo ancestry in Australia. It also attempts to quantify: Aboriginal population in the first decades after colonisation in 1788; past and present convict ancestry; and current ethnic composition in Christian and non-religious affiliations. An insight is gained into the future of the country's ancestral and religious make up around 2050, including prospective political battle lines and alliances. The book provides for the first time, possibly in the world, detailed research on policy and impact of the use of ethnic descriptors in crime reports. Sydney is used as a case study. The findings demonstrate inequitable reporting by NSW police and media for most descriptor categories, with weighting heavily against the terms 'Middle Eastern' and 'Lebanese'. Quantity Available: 1. Shipped Weight: Under 1 kilogram. Category: Sociology & Culture; Australia; Modern; Politics & Government, Current Affairs. ISBN: . ISBN/EAN: 9780646584256. Pictures of this item not already displayed here available upon request. Inventory No: 7606.
▲