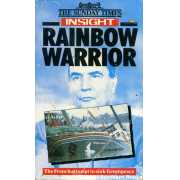 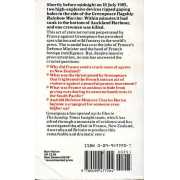 First impression. Size: 12mo Small. 302 pages. Text body is clean, and free from previous owner annotation, underlining and highlighting. Binding is tight, covers and spine fully intact. Pages lightly tanned throughout. All edges clean, neat and free of foxing. This book is available and ready to be shipped.. Shortly before midnight on July 10, 1985, two high-explosive devices ripped gaping holes in the side of the Greenpeace flagship 'Rainbow Warrior'. Within minutes it had sunk to the bottom of Auckland harbour, and one crewman was killed. This act of state terrorism perpetrated by France against Greenpeace provoked speculation and wild fantasy in the world's press. The scandal cost the jobs of France's Defence Minister and the head of French foreign intelligence. But despite massive press attention, no one answered the crucial questions : why did France send a crack team of agents to New Zealand? What was the threat posed by Greenpeace that frightened the French into an act of violence against a peaceful protest movement? What was France so anxious to hide from prying eyes during its neutron bomb tests in the South Pacific? And did Defence Minister Charles Hernu become a scapegoat for someone even higher up? Greenpeace opened its files to 'The Sunday Times' Insight team, which sifted through a mountain of evidence and investigated the affair in France, New Zealand, Australia and Britain to produce this remarkable and dramatic story. Quantity Available: 1. Shipped Weight: Under 500 grams. Category: History; Britain/UK; ISBN: 0099477203. ISBN/EAN: 9780099477204. Pictures of this item not already displayed here available upon request. Inventory No: 6770.
▲