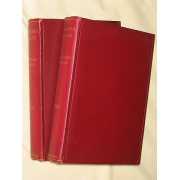 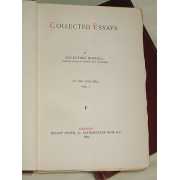 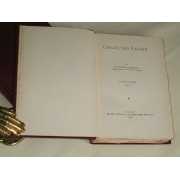 title pages in red & black; contents list at front of each volume; the collected essays by this Honorary Fellow of Trinty Hall, Cambridge mainly on literature, poetry, & their authors but also on men, women, books & some on other subjects such as nationality, politicians & book buying. Birrell was elected to parliament for West Fife at a by-election in 1889, as a Liberal MP & held his seat for some ten years. He was defeated in 1900 but returned for Bristol North at the general election of 1906 & introduced the Education Bill of that year which, later, was dropped making it impossible for Birrell to continue in his post, and in January 1907 he was appointed Chief Secretary for Ireland. While serving in government, Birrell supported a number of progressive measures and proposals such as expanded housing provision, land reform, and meals for schoolchildren. However, his failure to take action against the rebels in the weeks and months before the Easter Rising in Ireland led to his resignation in 1916. Birrell wrote, and spoke, with a characteristic humour which became known as birrelling. Size: Octavo (standard book size). 326 & 343 pages. 2-volume set (complete). Bindings tight, covers and spines fully intact. Slight foxing to endpapers only. Deckled outer & bottom edges (rough cut). Gilt titles spine. maroon cloth. Quantity Available: 1. Shipped Weight: 1-2 kilos. Category: Essays & Literary Criticism; Cambridge University; Trinity Hall; Books on Books; England; Literature & Literary. Pictures of this item not already displayed here available upon request. Inventory No: 3312.
▲