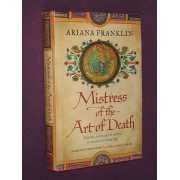 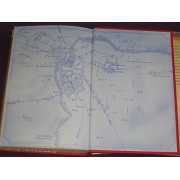 the author, whose real name was Diana Norman, died in January, 2011. She wrote four historical thrillers in this series of which this is the first. Jacket design by Miriam Rosenbloom is based on illuminated manuscripts in the British Library. Map end-papers of mediaeval Cambridge. The tale is set in Cambridge, where a child has been hideously murdered and other children have disappeared. The Jews, made scapegoats by the all-powerful Christian clergy, have been forced to retreat into the castle to avoid slaughter by angry townspeople. Henry, King of England, is displeased. The Jews provide a large part of his revenue and therefore the real killer must be found, and quickly. A renowned investigator, Simon of Naples, is recruited and he arrives in town from the continent accompanied by an Arab and a young woman, Adelia Aguilar. There are few female doctors in twelfth century Europe, but Adelia is one of them, having qualified at the great School of Medicine in Salerno. What's more, her speciality is the study of corpses; she is, in fact, a mistress of the art of death, a skill that must be concealed in case she's accused of witchcraft. Adelia's investigation takes her deep into Cambridge, its castle and convents and in a medieval city teeming with life, Adelia makes friends and even finds romance. And, fatally, the attention of a murderer who is prepared to kill again. Size: Octavo (standard book size). 389 pages. Binding is tight, covers and spine fully intact. in archive acetate film protection. Dust Jacket un-clipped. Gilt titles spine. red cloth. Quantity Available: 1. Shipped Weight: Under 1 kilogram. Category: Crime Fiction; Historical Crime; Historical Fiction; Cambridge; England; Medieval 10th to 15thc; Fiction. ISBN: 0593056493. ISBN/EAN: 9780593056493. Pictures of this item not already displayed here available upon request. Inventory No: 3266.
▲